Ten jobs that won't exist in the future – robot technology 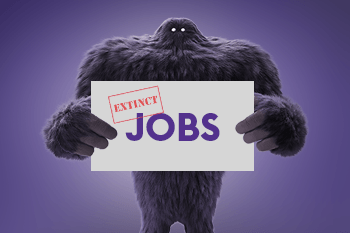 The field of robotics promises to be the most profoundly advancing technological transformation since the industrial revolution. The automotive industry has used robots for decades, but experts now predict an increase in robotic deployment is imminent. Despite being employed in many different industries, many don’t realise just how affected they might be by robotic automation in the coming decade, with every commercial sector expected to be touched by this advancement.

From shelf auditing and car manufacturing, to cow milking and bricklaying, there’s a robot potentially taking over your industry. And if they aren’t already working alongside you, they’ll be in production. So will your job be done by a machine?

Will a robot take your job? Intelligent machines are becoming increasingly more specialised and sophisticated. They're not just making the lives of their human counterparts easier: they're displaying exceptional productivity levels and multitasking labour-intensive roles like it's going out of style.

More than 1.4 million industrial robots are estimated to be installed in factories around the world by 2019 according to the International Federation of Robotics (IFR). With technology replacing jobs at a certain rate, we take a look at some roles that may not exist in the future.

With a variety of flight comparison websites to choose from, consumers are becoming increasingly independent when it comes to booking trips away. Most travel websites can do pretty much everything your average travel agent can, and offer the additional comparison feature to help consumers get the best possible deal.

The rise of self-service checkout machines suggests that cashiers may one day become obsolete. Looking further ahead, RFID systems, whereby tags are attached to items, checked and then added to an account, may be the answer to future service options.

Noticed a rise in the number of robocalls? You’re not the only one. An investigation by the Federal Communications Commission revealed that consumers received an estimated 2.4 billion robocalls per month during 2016. Internet-based marketing and internet-powered phone systems are quickly taking over from telemarketers.

When it comes to inspecting machinery, mines and wind turbines, you'd think you'd need a critical human eye to assess risks and mechanical faults. But automated technology has made an incredible leap forward, with drones and robots now integrating into industrial inspection.

Like the sound of this? Explore our Mechanical Engineer Jobs

An assembly robot can move faster and with greater precision than its human counterpart, and can be easily reconfigured, making it a low-risk investment for many companies.

It's not new news, but the popularity of online news sources means that hard copies are being increasingly pushed out of the equation. What with breaking news updates and downloadable newspapers, delivery services will soon be something the next generation will find bizarre and unnecessary.

It was once a highly-skilled role, but it's becoming common for players and spectators to question the decision of the referee, referring to instant replays to provide a more accurate result. This form of technology is continually advancing, so may no longer require human monitoring in the future.

Today's drivers only need to follow a few simple instructions, as technology in this field has been advancing for many years. The Docklands Light Railway is mostly unmanned and continues to be a success. Automated trains could well replace traditional models within the next five years, but ten years is more probable.

Robot nurses are already well established in the US and carry meals, post, bed linen, drugs and dressings to patients. The structured environment of a hospital makes it light work for robots to fetch and carry, decreasing the need for nurses. We’re not too sure about bedside manner, though.

Robot pharmacists are already in full swing around the UK. The process is simple: the robot picks the patients drugs and passes them via a conveyor belt to a human pharmacist for checking before being handed over to the patient.