Looking for Talent That’s Right Under Your Nose 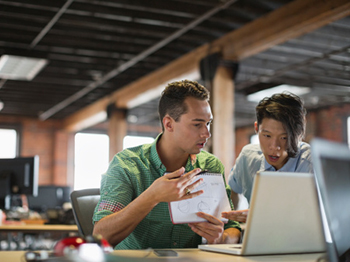 It was the poet T.S. Eliot who famously said 'The great ages didn't contain more talent, but they wasted less' and you can be forgiven for thinking that sometimes the current recruitment market seems to flip that on it's head with much talk of skill shortages and a lack of talent.

We're obsessed with finding great talent – the person who will blow us away, has experience in every area we need, is a supreme performer who can arrive fully formed and take a team or business unit to a new level – but sometimes that person may already be known to us and aching for the chance to prove themselves.

You can advertise to attract new people, or brief an agency to search, but it may be that you're overlooking people who already on your radar, such as…

You get the picture. There are a lot of places to look for potential hires, and sometimes the hardest talent to see is the talent that's right under your nose. The people you know, or have met, who for whatever reason may not have been right at the time but now could tick all the boxes.

Am I getting the best out of the people I already have?

Sometimes it's easy to see your people for what they are already doing, but what if they have untapped skills and expertise that aren't being properly utilised? It's best to focus on the attributes, attitudes, capabilities and knowledge that you are looking for rather than search keywords on a CV or for previous experience of doing exactly the same thing. Remember that past performance is not always a reliable indicator of future potential.

Who already has a relationship with my business?

It's often easier to employ someone who has a positive alignment with your business culture, values and goals. They may have worked with you before, or know people who work with you now (getting on with your colleagues is always a top factor in workplace happiness), or possibly be a supplier or collaborator to your company. If you have employees who are happy and engaged then they are likely to recommend good people to come and join them so never ignore the networks that your own people and partners have.

What applications have I received in the past?

Chances are that somewhere along the way you've already advertised for a similar role which required the attributes and capabilities you now need. It may be that the candidates who applied for the role then are now suitable for the role you are advertising. They may have gained more experience with a different company. Their aspirations many have been different then – they could have applied for management role but have since found their niche in a less structured environment so no longer want a management role. One of the big complaints from most job seekers is how their applications to a business seem to disappear in to a 'black hole' never to be considered for anything else.

It pays to keep in touch. Amongst the many interesting features of Facebook's acquisition of Whatsapp is that the latter's founder, Jan Koum, once applied to work at Facebook and was rejected. As Mark Zuckerberg says 'I've known Jan a long time and I'm excited to partner with him'.

Make sure you're keeping tabs on the talent that's right under your nose!

Mervyn Dinnen is an award winning blogger and a content & social engagement strategist. He specialises in the Recruitment and HR sectors and is a regular speaker and panellist at industry conferences.